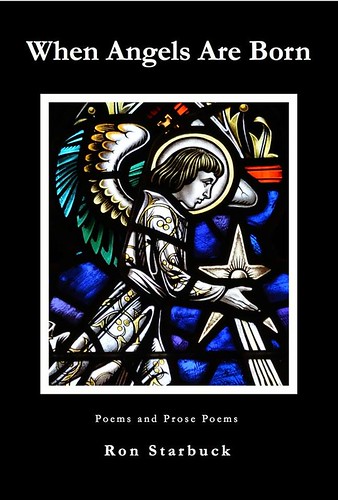 The Hebrew word מַלְאָךְ, “malach” means “angel” or “messenger.” In history, the angel’s primary function has been as envoy. In the New Testament, angels deliver one of the most important Christian messages of all, the birth of Jesus Christ. However, winged figures were present in other cultures thousands of years before Judaism, Christianity and Islam. These divine helpers were discovered in Sumerian, Persian, Egyptian, Babylonian and Greek writings and profoundly influenced key religions.

While angels may be known by different names, benevolent spirits can be discovered within other beliefs and mythologies. Hinduism has avatars, Buddhism has bodhisattvas, the Greeks wrote about daemons, and other beings similar to angels, such as guardian spirits and spirit guides have long been taught by tribal cultures. 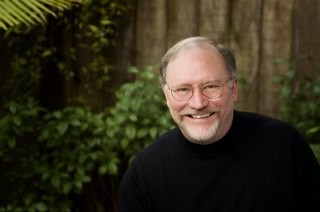 In Ron Starbuck’s latest collection, When Angels Are Born, the idea of angel as messenger takes on the embodiment of encounter. Within this ecstatic and often profound collection of poems we discover beings in deep communion personifying Starbuck’s world in a reverent and highly sensual landscape. For Starbuck, poetry is a language of deep intimacy, one that is meant to touch the human spirit and awaken it to the mystery of life. Surrounding these mysteries is an awe inspired voice, readily perceivable in other transcendent poets such as Mary Oliver, Walt Whitman and William Blake. A directness, as present as a bee’s mandible delicately probing for nectar. Many of these poems are nature based and take their influence from thoughtful engagement with an Interfaith-Buddhist-Christian dialogue. There are aspects of Christian mysticism, Zen and Mahāyāna Buddhism. Each poem a prism of the compound spiritual eye, bringing new breath to ancient wisdoms such as in the opening poem There are Times.

There are times when I cannot tell
the difference between you and me,
of us together. . .
We are as one as waves of light are one,
reflecting off the snow whiteness
of a jasmine blossom in spring.

Each poem attempts to engage the reader in a personal dialogue, whether the poet is wandering amid Tuscan dwellings in Pienza or sitting eye to eye with a monarch. In fact, in one of my favorite poems in the collection, “The Monarch,” subtitled “Anam Cara” (after John O’Donohue’s Anam Cara: A Book of Celtic Wisdom), butterfly and being interlace in a metaphysical flight of symbolism.

Landing lightly she came as a revelation, a benediction,
enfolded in the rich ginger and auburn of her Monarch wings.
A mystery whose color I cannot clearly disclose or discern,

reminding me of a near friend, whose most intimate looks and gestures
are a language unto her own, one we share in wonder filled moments
together. Uncovering veiled places, which can never be denied,

as time releases a newness that cannot easily be named
or found in all the known colors of this earth. In the Monarch’s
flight, she binds us together softly

upon wings that barely touch, so delicate in appearance
and beauty they simply break open our own hearts revealing
their truest majesty. We have learned to be brave together,

fearless in spirit, in a garden held independent of time.
She takes my breath, folding it into her own with the
brightness of her being.

And of us together, giving us breath, as we dwell in
one another, as one body in one motion. In the
delicate flow of the Monarch’s wings,

in her softness, her gentleness, as she
opens to me. Is not each star a witness to this
unity? I love the color and shape of her eyes,

and how they capture mine, and how I see a reflection
of her always in me, waiting like spring, when the milkweed
blossom opens itself as a mystery to the first Monarch.

The flight continues through other sojourns between nature and spirit, always keeping the dialogue open with the reader, asking us to consider our own philosophical bearings in light of the poet’s gentle probing. Like the self, the wind has no name, and it has many, whom the self is coming and going,/changing with the wind from moment/to moment. Our selves are many, they are/legion. . . . /What is time except an abstraction of the mind. . . /Let us ask wise Vyasa or Ganesha.

There’s an unexpected tête-à-tête between Carl Sandberg and Marilyn Monroe inspired by a 1961 photograph by Len Steckler. This time a dialogue of perception and belief asking us to see beyond iconisms to the creative soul of conscience:

when you look closer, delve
deeper, there is something more
there than sorrow and misuse. A searching
intelligence, a poem perhaps, waiting

at the edge of her soul, suspended at tongue tip,
a voice she never discovered to speak with clearly.
I wish we could give her that writer’s voice
now, to let it converse in all its elegance.

Sandburg saw it, he saw her (Monroe) more clearly
in this moment than all the movie directors
and producers who ill-used her,
counting up coins in their film editing rooms. . . .

Through a certain native grace, the poet discovers angels in each encounter and further celebrates the opportunity to explore our interconnectivity. In these bright poems—this alchemy of poetic conversation we are asked to enter daily into a relationship with one another. Indeed, Ron Starbuck says, the reality we experience every day of our lives arises out of our relationships and the world in which we live, with all of creation.

Ron Starbuck is publisher and CEO of Saint Julian Press, Inc. He is the author of the books When Angels Are Born and Wheels Turning Inward. Both books are rich collections of over fifty poems, following a poet’s mythic and spiritual journey that crosses easily onto the paths of many contemplative traditions. Ron has written poetry and practiced contemplative prayer for many years. He has been a contributing writer for Parabola Magazine and has been published in Tiferet: A Journal of Spiritual Literature, as well as having an interview and poem in The Criterion: An Online International Journal and The Enchanting Verses Literary Review. He has work forthcoming in Levure littéraire and Pirene’s Fountain.

Lois P. Jones is a host of Pacifica Radio’s “Poet’s Café” (KPFK 90.7 fm), and co-hosts the Moonday series in West Los Angeles. Publications include Narrative Magazine, The Warwick Review, American Poetry Journal, Nassau Review, Askew, and Antioch’s Lunch Ticket with upcoming work in Eyewear and the Goodbye Mexico Anthology (Texas Review Press, Sam Houston State University). Her work has won honors under judges Fiona Sampson, Kwame Dawes, and others. New Yorker staff writer Dana Goodyear selected “Ouija” as 2010 Poem of the Year. She is the winner of the 2012 Tiferet Prize, the 2012 Liakoura Prize, and is featured in The Tiferet Talk Interviews which includes Robert Pinsky and Julia Cameron with host Melissa Studdard. She is a recipient of an award from the Arroyo Arts Collective for their 2014 Poetry in the Windows Project. Lois is the Poetry Editor of Kyoto Journal and a multiple Pushcart nominee.