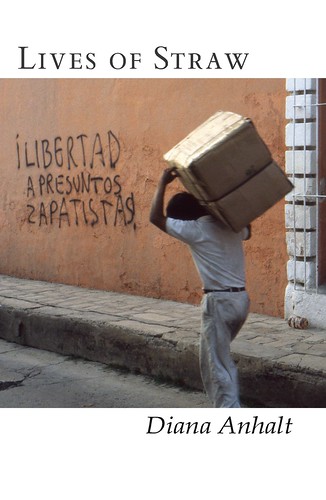 Diana Anhalt’s poems in Lives of Straw offer the reader an inside view of Mexico as witnessed through the eyes of someone who is an integral part of its culture. Her poems are written with a sensitivity and depth only the bicultural can inherit. She allows the reader to inhabit this diversity through the voices of its people: a pole flyer in Chapultepec Park, a sidewalk scribe, a lottery vendor, a flame swallower, a curandera and a cliff diver, among others. She reveals the throb of life in her landscape of street scenes, parks, and cemeteries until the reader too inherits a sense of “Querencia” or belonging rooted in the people and places that comprise the complex culture that is Mexico.

A perceptual and sensitive observer, Anhalt does not write as a visitor, but rather as one who has sunk her roots there as a child becoming fluent in its language and customs. Through her poetry, she reveals how the traditional merges with the New Millennium. In the collective voice of “The Sidewalk Scribes’ Lament,” her landscapes are “Under the Portal de los Evangelistas/ in the Plaza de Santo Domingo” where sidewalk scribes play an elemental key role—“we sidewalk scribes who still remain/ take down, for a peso or two,/ the thoughts of unlettered strangers.” This recognition of the traditional and the modern rubbing shoulders under the portals and in the plazas of Mexico is unveiled in the last lines of the poem:

Nowadays, we jumpstart
our silent electrics with stolen current,
and watch from our stools as youngsters
saunter by, heads bowed over iPhones.

Spirituality and survival also weigh heavily into the transition of a country from its complex history to the present, which is recognized by Anhalt in the poem “A Pole Flyer in Chapultepec Park.” Through the voice of a young male, she reveals a blending of traditions.

Clothed solely in courage and feather of eagles we skimmed
through the air—sun-shot, limpid—saddled tightly in prayer and tradition.

The gods know me by now, allot me space
to spiral through their skies and return my feet to earth.

In addition to Anhalt’s attention to cultural transitions, varied landscapes, and diverse voices, her poems resonate with the detail and expression of everyday life. She takes what one might consider mundane and infuses it with possibility as in the poem “Her Line of Business,” where Esperanza, a name that translates as Hope, saves a place in line for others in front of the U.S. Embassy—

For $85 pesos,
sometimes more, she arrives before dawn,
camps in yesterday’s footprints.

of a Green Card’s safe passage?
A visa’s promise?

Each poem in the collection attests to Anhalt’s attention to detail and appeal to the senses. She leads the reader through the streets letting sounds, smells, tastes, sights, and tactile responses infuse the experience. In the poem “La Curandera,” Anhalt gives directions by allowing the senses to guide the reader through the side alleys in search of the curandera with her traditional healing—

Turn right at the agua fresca stand,
follow the fragrance—coffee, cinnamon, clove—
you’ll find her, mortar and pestle in hand,
incantations on her tongue as she seizes
a handful of moonwort—

Although many of the poems are written in the voice of others, it is her own voice, strong and unwavering, that underscores her deep connections to the land and people she came to as a child. With an appeal to the senses, she processes the longing and belonging she feels for her adopted country in the poem “Querencia”—

a word that inhabits my Spanish–speaking mouth,
lies under my tongue and smells of evergreens,
and rain, Mondays, smoke. From the word querer—

In Lives of Straw, Diana Anhalt gives us poems that reveal Mexico’s multi-layered culture, a culture that dazzles and surprises. She writes with appreciation and admiration for her adopted country. If you want to savor the passion, places, and characters that compose the true Mexico, Anhalt, a perceptive and sensitive guide, is the one to take you there.

Kate Kingston’s most recent book of poems, History of Grey, a runner-up in the Main Street Rag Poetry Book Award, has just been released by Main Street Rag Publishing. She is also the author of Shaking the Kaleidoscope, a finalist in the Idaho Prize for Poetry, and three chapbooks. Kingston is the recipient of the W. D. Snodgrass Award for Poetic Endeavor and Excellence, the Ruth Stone Prize, and the Atlanta Review International Publication Prize. She has been awarded fellowships from the Brush Creek Ranch Foundation for the Arts. The Colorado Council on the Arts, Harwood Museum, Helene Wurlitzer Foundation and Fundación Valparaíso in Mojácar, Spain, among others. She received a Master of Fine Arts in Writing from Vermont College and a Bachelor of Science in Education with a Spanish major from the University of Wisconsin, Madison. Kingston has served as Language Department Chairperson at the College of Eastern Utah and Professor of Spanish and Writing at Trinidad State. She currently lives and writes in Trinidad, Colorado.

Diana Anhalt is the author of three chapbooks, among them Second Skin (Future Cycle Press) and Lives of Straw (Finishing Line Press), and of essays, short stories and book reviews published in both English and Spanish. Her poetry has appeared in a wide variety of publications including Nimrod Journal, The Atlanta Review, Sow’s Ear, and Comstock Review. In an attempt to learn more about the political expatriates who fled the U.S. and settled in Mexico during the McCarthy Era, she wrote A Gathering of Fugitives (Archer Books). Her prose and poetry has received awards from Passager, The Writers Place, Common Ground, Litchfield Review, and Frith Press, among others.