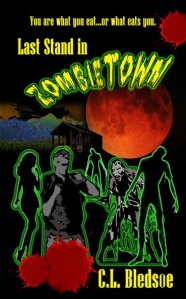 C. L. Bledsoe’s Last Stand in Zombietown has big yellow teeth and rotting gums not seen since the advent of modern denistry. The novella chews up your sense of decorum and leaves you laughing about it. It is not intended for anyone in need of an aortic bypass, or suffering irritable bowels. Bledsoe’s energy comes from pithy verbal skirmishes, crass sex scenes, and cutting commentary on everything from Sam Walton’s clientele to Yankees and yuppies.

Anti-hero Earl Bedford is a retired cop removed from society in the hills of Arkansas who chooses to stretch his pension by robbing banks. The humorous tone of the book is set in the opening pages when we find Earl contemplating his physique (fat ass), while casing a bank, and enjoying stimulation from his female crime partner. Following the robbery Earl struggles to keep it together after several mishaps to make it home to his isolated cabin in the Ozarks. His pregnant wife shot a cop during their escape. The feds are hot on Earl’s tail and he is contemplating a move to Mexico. Worst of all, his remote hometown is invaded by Yankee tourists. And then of course there is the looming zombie apocalypse.

Zombies appear late in the story. Later than a zombie aficionado might prefer for a 107-page novella. Admittedly this was a little confusing, but may signal that zombies are a sideshow to the main action. Or at least another hurdle for the protagonist.

But let’s face it, zombie stories are seldom about zombies. Monsters are metaphors on acid. The zombie genre typically highlights the human relationship dynamic stressed by chaos (The Walking Dead TV series), or the helplessness and then resourcefulness of humans (World War Z), or innate humor of zombies ruling the world (Zombieland). When all is said and done, readers could expect Earl to shed his cynicism, abandon his plans to flee, and assume the hero’s role in the face of the true villain: a living human being.

The author deftly uses zombies to propel characters towards one another. Earl and T.S.N. (the self-righteous evangelical F.B.I. agent), while arch enemies in the “normal” world, begrudgingly partner to escape the flesh-eating herds. Their true characters soon emerge when faced with the judgment day, and the drug-induced federal agent runs for the hills to save himself, leaving others to contend with the zombies.

At the same time the bank-robber Earl, provoked by his conscientious baby mama, works to protect the living. Both anti-hero and villain-cop cannot live in the same apocalyptic world, let alone a cabin in the Ozarks, the only safe place in Arkansas. This creates the ultimate, ending conflict between the two that can only be resolved by explosive violence.

Zombie stories, as metaphors, sometimes indict modern society or culture. They carry a message of morality, and highlight the popular indictment that modern society acts as a mindless mob incapable of independent thought. In Zombietown contaminated preservatives in processed food creates an infection mimicking a rabies reaction. A humorous and unique take on the creation of zombies, it seems to serve to carrying a message about our culture’s eating habits. The mass consumption of unnatural food preservatives and high fructose corn syrup could be an indictment of society’s zombie-like attitude towards food.

Bledsoe’s prose is simple, the dialog, brash and cutting. The story moves in short chapters along a straight line and ends explosively, but not surprisingly. The dialogue exchanges and odd characters make the novella a fun read and moves the story along briskly. Blodsoe’s talents lie here. He may rely too often on that talent and some of the character exchanges would have been funnier if they ended sooner. All and all, the novella packs enough energy and action, even without the zombies.”

C. L. Bledsoe novels is the author of five novels including the young adult novel Sunlight, Last Stand in Zombietown and $7.50/hr + Curses; four poetry collections: Riceland, _____(Want/Need), Anthem, and Leap Year; and a short story collection titled Naming the Animals. A poetry chapbook, Goodbye to Noise, is available online HERE. Another, The Man Who Killed Himself in My Bathroom, is available HERE. He’s been nominated for the Pushcart Prize 8 times, had 2 stories selected as Notable Stories by Story South’s Million Writers Award and 2 others nominated, and has been nominated for Best of the Net twice. He’s also had a flash story selected for the long list of Wigleaf’s 50 Best Flash Stories award. He blogs at Murder Your Darlings, which can be found HERE.  Bledsoe reviews regularly for Rain Taxi, Coal Hill Review, Prick of the Spindle, Monkey Bicycle, Book Slut, The Hollins Critic, The Arkansas Review, American Book Review, The Pedestal Magazine, and elsewhere. Bledsoe lives with his wife and daughter in Maryland.

Jeff Sural’s poetry has appeared in Free State Review. He was recently named a finalist in the 2013 Eddie Bauer Jr Screenplay Competition for his screenplay short How Many Times Have I Told You Not to Go into the Attic. He currently haunts Annapolis, MD.