If you were a student in the Hopkins Writing Seminars and were arrested for urinating in public after a night of heavy Barth it is possible that your restitution would include hosting a monthly poetry forum at a youth hostel as a form of community service. You might hold forth on a different poet each month until your time was served. One Sunday afternoon, Yeats. On another, Berryman.

Sooner or later the conversation would turn to poet Charles Wright who recently became our nation’s poet laureate. Or rather, poetry consultant, which title is more in keeping with a Federal city full of consultants. Perhaps you would begin the story this way: Charles Wright was born in Tennessee where alcohol and poetry go hand in hand. You might add that Jack Daniel, Andrew Jackson, and Charles Wright are the Bermuda Triangle of long-windedness. 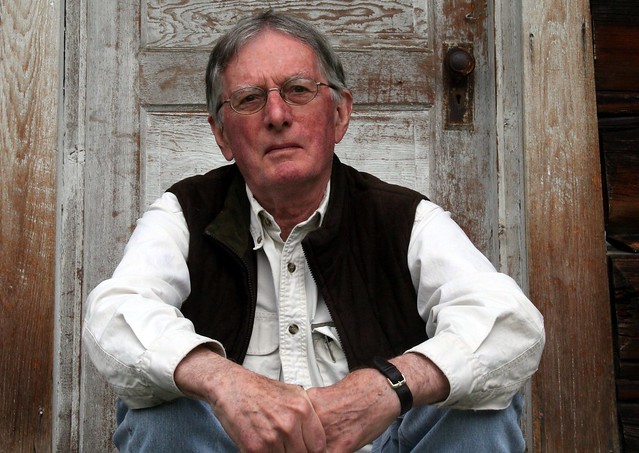 Now would be a perfect time to distribute some Xeroxed pages of Wright’s most compelling work—“Self Portrait,” “Laguna Blues,” “Portrait of the Artist with Hart Crane,” “Hasta la Vista Buckaroo,” and “January II.” It’s a handsome selection focusing on Wright’s obsession with death, especially suicide. Not bad for an afternoon of guilty-piss duty. “Next month,” you may find yourself saying, “We’ll tackle the French.”

What a pity, because there is so much more to Charles Wright. His is not an obsession with death but the stopping of time. Death is just a metaphor for some precise moment that lives forever. Wright’s Zone Journals offers an excellent study of the poem as memoir where the sense of place, and Wright’s places are quite varied, is not as important as is a sense of time. His map of the world resembles a clock face. The names of the rivers, churches and graveyards are irrelevant compared with the motions of water, or Holy thoughts, or the burying of time itself.

Consider the opening lines of his “Yard Journal”: “…afternoon starting to bulk up in the west / A couple of hours down the road,” and later “the past is never past: / it lies like a long tongue / we walk down into the moist mouth of the future / … / Somewhere out there an iage is biding its time.” Wright’s landscape is almost entirely composed of untouched primitive elements: sky, sun, clouds, rain, rivers, tidal basins, pools, puddles, and lightning strikes. Journeys, for which we keep a journal, are expressions of seasons and months, departures and arrivals, “time spent” and not places visited.

“A Journal of English Days,” “Night Journal” and “A Journal of True Confessions” pepper the reader with impressions to prepare us for the poetry which follows—the fifty page “Journal of the Year of the Ox” which takes us through his life as a boy, the historic settling of Tennessee, sundry trails of Cherokee tears, his teaching at the University of Virginia, and travel to Italy. The “stations” in “Ox” are unified by observations of weather which for Wright signifies “change through time” and for Darwin, “evolution.”

Like Brueghel paintings (of whom Wright has also written), when space and time are not fixed the reader’s eye has nowhere to focus apart from the cascading images and Wright’s brief declarations. In fact, without “scene” those assertions seem more prominent. The form of his “Zone Journal” poetry incorporates lines without uniform meter and imbalanced stanzas. He uses significant indentation so that the ends and beginnings of lines occur off stage. As he writes, “What’s outside the picture is more important than what’s in.”

In “Ox,” Wright talks about “whatever we can’t see, whatever we can’t touch” by selecting one or two random days from each month and to rally around its moments. His rallies are “unfixed and shining” as the view shifts from century to century and to a sky which is “wrung out, China blue / and hides no meanings. / All of it hustles over me like a wind and reminds me of nothing.” And later, “It’s the blank page—not the words it’s never the words— / that backgrounds our lives.” His declaration, “the stillness of form is the center of everything” becomes noteworthy since Wright’s form is never still and it has no apparent center.

This is the disappearance we all dreamed of when young,

without apology, tougher than water, no word
to anyone,
disguised as ourselves
and unrecognizable, unique
and undistinguishable, from what we disappeared into.

There is a kind of self-annihilation at work here which is disguised as a journey without a starting point or destination. It’s recorded in a calendar without any days. The obvious or logical lines which he leaves out provide the keys. Notice the missing connective tissue in the following:

The winter sunlight scours us,
The winter wind is our comfort and consolation.
We settle into our ruin.

If our “ruin” is our “comfort and consolation,” then our survival can only come from our discomfort and disconsolation. Wright’s shapeless form is certainly not very comfortable at times, but it had a way of lasting in our minds and is sweetly chorused by the constant rustle of a Weather Channel at low volume, the sweeping Doppler radar whorls like strokes by Van Gogh: “Such a hustle of blue skies from the west,” and “the world is an ampersand, / And I lie in sweet clover… / watching the clouds move and the constellations of light move.”

In Zone Journals, Wright shows us that we don’t always know whom we love or where we are or what “time” it is, but we do know well the contour of the wind and what the trees are doing and how the rivers and rains are pushing and pulling about. Wright’s line “Nothing is so beautiful as the memory of it” combines with his previous note “Every day I remember less” to create the sense that every day there is less beauty because every day there is less memory of beauty because of our comfort. We can only reclaim ourselves when we surrender to the elements.

What makes us leave what we lobe best?
What is it inside us that keeps erasing itself
When we need it most,
That sends us into uncertainty for its own sake
And hold us flush there until we begin to love it?

Charles Wright was named the U.S. Poet Laureate in June 2014. He is the author of 20 volumes of poetry, including Black Zodiak, Chickamauga, and the trilogy The Appalachian Book of the Dead (Country Music, The World of 10,000 Things, and Negative Blue). He is not the first poet laureate to have served four years in the Army, but he probably is the first to have recovered from severe drug addiction. Among other praise, Wright is known for “the search for transcendence in the landscape of the every day.”

Barrett Warner‘s stories, poems, and essays have appeared recently in Entropy, Four Chambers, Passager, Tiferet Journal, and Yemassee. In 2014 he won the Chris Toll chapbook prize for his collection My Friend Ken Harvey, the Salamander fiction prize for his story “Dimension” as well as the Cloudbank poetry prize for his poem “Tanya, Tanya, Tanya.” The Maryland native has a blog, and he’s not afraid to use it.