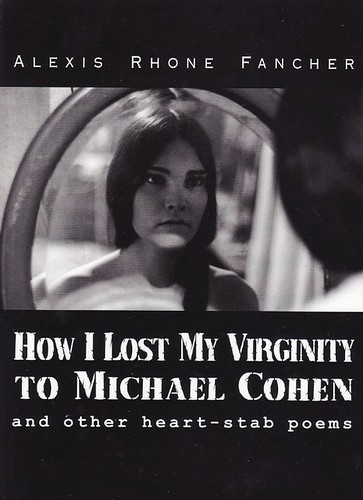 There are few, if any, poets like Alexis Fancher from Los Angeles. Many poets write street talk, about sex as a sport and a pastime, as an occasion for costumed soap opera. Ms Fancher is like a stripper, artfully unveiling a raw naked female desire, while dropping silk images teasing, arousing the reader with both sexual and mental energy. A reader of this poet must leave the puritanism, the nun-taught culture, the strict patriarch at home. Ms. Fancher is the ultimate liberated woman as she writes a swaggering, seductive language. She takes an adult reader, and you should be an adult to read her poems, into the REAL world where sexual desire is a force to be reckoned with and not denied.

The poems come from all directions. She takes on a number of personas. She is an adolescent exploring her body; she is a bad girl seeking tenderness; she is in revolt against her father; she is a wife, a mistress, a woman in an Edward Hopper painting. She speaks mainly in free verse but she also writes an “urban haiku,” following the precise number of syllables required. She writes prose poems that caress, verse that slaps in both anger and sex, confessions that expand, that shrink, that look in the reader’s eyes and shock, mesmerize. Ms. Fancher has been called a female Charles Bukowski. She can dip into the same trough of language and be as raunchy as he was but there is much more. She has a heart and she can wear many masks. Ms. Fancher’s people can drink in any bar, the rundown kind but also the swanky joints too. Her poems have irony as well as direct raw talk. She dances to many rhythms and often creates her own. Here is a very individual poem, characteristic only in its vibrant creativity:

Upon Running into My Ex on a Summer Afternoon

1
We up broke.
Got back ack ack.
Broke down, betty.
Open,
Broke open like eggs,
Crack crack.
We had a rhythm,
A mad love, mad, I tell you!

3
Oh, that hot
Tequila night
I dressed in
Moonbeams
Still gets
Under
Your skin, huh?

All of the poems in this book are quotable. All are alive with life. Yes, sometimes the life is interesting to visit but you wouldn’t want to live there but the key word is “interesting.” The artistry is apparent in everything our poet touches. Take this short poem:

The Best Blondes in L.A.

stroll Rodeo Drive, on the prowl
for music execs, lawyers,
not actors, (subject to
reversal of fortune, on the street
at cancellation).
no. money talks and a girl has
a short shelf life. No one said
stupid was a hair color.

Ms. Fancher is an observer; she is a participant. She is worldly wise, cynical but still romantic, lusty to the core. Here are the opening lines of “Under Water”

Forget them. The men who looked right through you, used you up,
The ones you opened wide for when you should have run.
Forget about pop songs you listened to in secret, ones that made you
Think someone was out there, just for you. It isn’t true.
Forget the fumblers, the degenerates,
The bad boys, the all-that-you deserves.
That fast-talking charmer who popped your cherry in the dark?
The baller who refused to give you head? The rich kid
Who left you at the hotel, holding the bill? All bastards, still.

However, with all the warning, the disappointments, the strictures the poet writes, her characters are sensuous, sensual, open, often moan with joy into the night of stars, of mist, of ocean waves. As to form, co-opting the ad campaign for a line of cars, all Alexis Fancher’s poems have “innovation that excites.” I add her book as a newly acquired treasure to my bookshelf.

As a side note, our poet is also a photographer and an excellent one. Facing almost every poem there is a black and white photograph of L.A. buildings, of a white dress, of sexy vulnerable sassy sweet women, of shoes, of flowers, and more. And though my comments here about her photography are a mere footnote, her art with the camera is also very considerable.

Alexis Rhone Fancher’s work can (or soon will) be found in Rattle, The MacGuffin, Carnival Literary Magazine, Fjords Review, Cliterature, The Chiron Review, Good Men Project, Bloom Literary Journal, rawboned, Boyslut, Deep Water Literary Journal, Poeticdiversity, Little Raven, This Is Poetry: Women of the Small Presses, Gutter Eloquence, Slipstream, The Mas Tequila Review, Broadzine!, Bare Hands, Luciferous, High Coupe, Bukowski On Wry, Poetry Super Highway, H_NGM_N, The Serving House Poetry Journal, and elsewhere. She has been published in over twenty anthologies and chapbooks, both in the United States and abroad. Her photographs have been published worldwide. Since 2013 Alexis has been nominated for three Pushcart Prizes and a Best of the Net award. She is poetry editor of Cultural Weekly. She and her husband, Fancher, live and collaborate in a loft/studio space in downtown Los Angeles. They have a spectacular view.