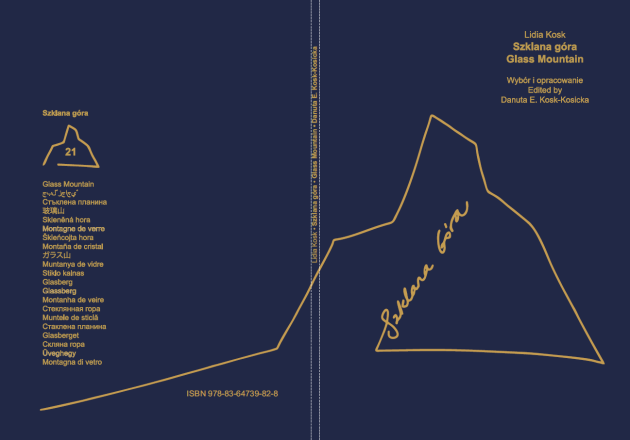 Start with a single, haunting poem in a language that has around 50 million speakers – Polish, for example. Translate that poem into the “gateway” language of English, which has about 360 million native speakers and nearly 1.5 billion speakers worldwide (it helps if your mother is the original poet – you’re unlikely to go far wrong in your translation!). Then enlist the help of translator friends and acquaintances around the world – before you know it, the original poem will give birth to new poems in languages ranging from Arabic to Japanese to Norwegian to Upper Sorbian, as well as to works of visual art and musical adaptations.

This simple, elegant idea was the genesis for Polish poet Lidia Kosk’s Szklana góra / Glass Mountain, a book-length project conceived and orchestrated by her daughter and principal English translator, Danuta E. Kosk-Kosicka. Kosk-Kosicka is an award-winning poet in her own right, as well as translation editor for Loch Raven Review. The book, whose very cover is a work of visual art on the theme of Lidia Kosk’s glass mountain, contains 21 translations of Kosk’s short poem “Szklana góra,” whose English version (translated by Kosk-Kosicka) begins

Even if you don’t read Spanish or Hungarian or Mandarin, this little book will capture your imagination. Kosk-Kosicka’s unusually thoughtful introductory note not only describes how the project was conceived and then took on a life of its own, but her own shifting and sometimes-nervous responses as her mother’s poem wandered into languages she herself could not read and whose translated versions she could neither understand nor evaluate. Sometimes the translators had numerous questions (worrisome); sometimes they had none (even more worrisome!). While Kosk-Kosicka personally knew a number of the translators, others were internet acquaintances. As she writes, “Poetry has linked us on an emotional plane, and that bond now takes physical form in the pages of this book.” Kosk-Kosicka’s note – and the remarkable project it describes – is an unabashed valentine to the power of poetry and translation to cross borders, to open hearts and minds, and to bring people together.

Lidia Kosk is the author of twelve books of poetry and prose, and two anthologies. Her collaboration with the poet and translator, Danuta E. Kosk-Kosicka, resulted in two bilingual volumes: Niedosyt/Reshapings and Słodka woda, słona woda/Sweet Water, Salt Water. The Japanese edition of the second book appeared in 2016. Kosk’s most recent book is Szklana góra/Glass Mountain, edited by Danuta E. Kosk-Kosicka. Translations of her poems have appeared in many literary journals and anthologies, including in the USA, Russia, and Japan. Lidia Kosk’s poems, translated into choral compositions, have been performed in several countries. She resides in Warsaw, Poland.

Danuta E. Kosk-Kosicka is the author of Oblige the Light (CityLit Press, 2015), winner of the fifth Clarinda Harriss Poetry Prize, and Face Half-Illuminated (Apprentice House, 2015), a book of poems, translations, and prose. She is the translator for two books by Lidia Kosk, nominated for translation prizes. Her translations of poems by three Maryland Poets Laureate—Lucille Clifton, Josephine Jacobsen, and Linda Pastan—have been published in Poland; her translations of poems by Grzegorz Białkowski, Ernest Bryll, Lidia Kosk, and Wisława Szymborska have appeared in over 70 publications in the USA. Co-editor of Loch Raven Review, she resides in Baltimore, MD. Website: danutakk.wordpress.com

Katherine E. Young is the author of Day of the Border Guards, 2014 Miller Williams Arkansas Poetry Prize finalist, and two chapbooks. She is the translator of Farewell, Aylis by Azerbaijani political prisoner Akram Aylisli (forthcoming 2018) and Blue Birds and Red Horses and Two Poems, both by Inna Kabysh. Young was named a 2017 National Endowment for the Arts translation fellow and currently serves as the inaugural poet laureate for Arlington, Virginia. http://katherine-young-poet.com/