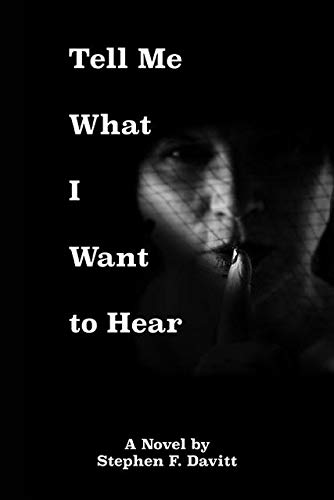 Stephen F. Davitt’s novel Tell Me What I Want to Hear, a unique novel about Irish immigrants who settled in Baltimore in the last years of WWI, is not the story of immigrants that would be told at an ethnic museum. How much of this particular tale is history? How much brilliant imagination? Though fiction, the story is plausible. The quiet, uncelebrated facts of history prevail and change the future. The unsaid is said. The unimaginable is imagined and acts out on
the printed page. The events and actions of the story are detailed in a very revealing way. No one’s heart will be unmoved.

The story begins in Baltimore, Maryland with the murder of Henry Weiss. Before long we are back in Ireland at the time of the Easter Uprising in 1916. The reader meets Danny and Helen, two young romantic lovebirds, innocent as any hero and heroine. Events unfurl furiously. History comes alive. The reader will experience the truth of those years and the human truth of history, which is not always pretty.

The narrative is fast, furious; the scenes are dramatic. Life, justice, human emotion is carried along in the smallest details of the story. Davitt’s talent is immense. He can illuminate odd characters like Charles Dickens; he can portray action as well as any bestselling author. His language has a lyricism. His descriptions not only capture physical fact, but shadow his scenes with the thick fog of emotion.

The sky is a deep gray. Nature’s colors have drained away to black and white. It gives the church steeple a menacing look. A cold autumn wind stirs up the dead leaves in little tornadoes outside St. Mary’s. Men in black suits stand on the church steps smoking cigarettes and passing a thermos of coffee around.

Inside the church in the front row, sitting alone, is Mrs. Weiss. She’s dressed in black, veiled in mourning, Her eyes are bloodshot, and her nose is a red sore. There’s no organ music. The only sound is the footsteps of an old man on the marble floor. Hunched over, cane in hand, dressed in army green, a member of the Veteran’s society, he comes up and gives Mrs. Weiss a flag and a handshake. He walks over to the coffin and salutes. With the speed of a sundial’s shadow, he turns around and exits through the back of the church.

How the reader gets there, and where he goes from there is the story, which clashes with that heavy sobriety at times, and, at other times, cries with the same intensity. The narrative is not fantasy, but a plunge into the deep emotional well of the heart.

An interesting sidelight to the novel is its capture of the historical period. Some of the details may be fictional. The statue of Robert E. Lee that plays an important part in the drama is not the historical statue of Lee and Jackson, which stood for decades on Museum Drive near the Baltimore Museum of Art. However, the symbolical significance is as real as any erected statue to the hero of the Lost Cause. Though the tale is about Irish immigrants way past the time of the Civil War, that war has a relevance to the early 20th century murder and the story of Irish immigrants trying to make a new start in America.

What makes the story special and memorable? It isn’t the symbolism of Robert E. Lee, or the American Civil War, with which we are familiar. It is the perversity of human personalities and the chance rule of events on people’s lives. As the story relates, Danny and Helen, three years before their escape to America, were on an outing in Ireland on a lake on a pleasant day, until they encountered a small group of British soldiers. Don’t forget this was Ireland in 1916. What the British did to the Irish on a large historical scale was enacted in miniature. I will leave the telling of that to the novel. The author doesn’t bowdlerize any of it. It sets a series of consequences in motion that result in a murder in America. The Irish were thought of in the British Isles as blacks were, and to a degree still are, in the United States. It is interesting how Davitt ties so much together. Danny gets a helping hand from Tom Willis, an African American,
in Baltimore. Notice how Willis is viewed by the immigrants. The parallels in treatment are instructive of both a flaw and the possibility of transcending that flaw in how we treat each other.

I don’t want to reveal the particulars of the novel. Discovering what comes next is part of the joy of reading it. The other joy is admiring the masterful writing. How everything is so plausible and so intense will make this novel memorable. The reader experiences what the characters experience. The novel is like an earthquake to both the mind and heart. It raises questions about both crime and punishment, responsibility and human forgiveness. The novel is an
American and Irish version of Dostoevsky’s world. At times there is nothing easy about reconciling morality to the will of survival. What is evil? It would be interesting to hear what each reader thinks and feels about that question. This story poses no easy answer. To say the novel is extremely powerful in revealing society and the human heart is an understatement.

It must be noted sadly that Stephen Davitt died within a week of completing the novel. A real life turn of fortune not inconsistent with the novel. We are lucky to have the book. It is an experience of a lifetime and a take on history as true as anything in a history book. History is lived, not just narrated. Davitt’s death? A heart attack. A chance of misfortune. Whatever literary pursuit he would have undertaken after this novel we will never know. Be thankful we have this novel. It is a shame that he won’t enjoy the kudos he earns for it.

Stephen F. Davitt, 1957-2020, writer, jazz trumpeter, and video/artist producer, had a distinguished career as a videographer, working with Maryland Public Television, Voice of America, and several sports teams. He provided the visual and audio material for a series of books published by Yale University Press on learning spoken Arabic and Gaelic Irish. He was widely traveled, Originally from New York, he lived in Baltimore for the final years of his life.

Dan Cuddy is currently an editor of the Loch Raven Review. Most recently he has had poems published in the End of 83, Broadkill Review, Welter, Bhubaneswar Review, the Twisted Vine Literary Journal, the Pangolin Review.