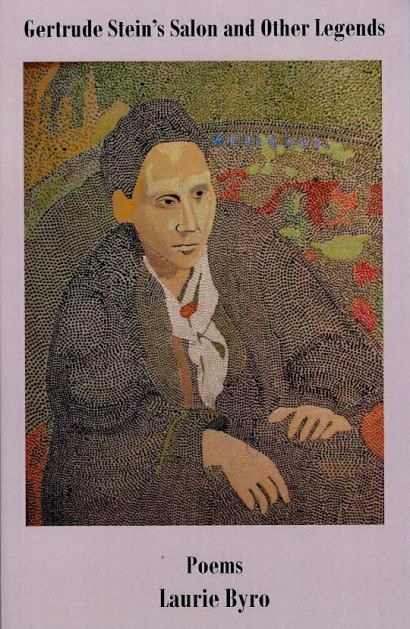 Laurie Byro loves to tell stories—be they stories about historical or fictional characters or animals or mythological figures, and sometimes, nay very often, a mix of all of the above. She also weaves in myth and legend which may make her work complicated for some readers. Unlike many poets, she typically doesn’t write about herself or her own circumstances, although some of her poems—a small percentage of her total output—have been written about her late father, although still in her unique style. Byroesque, one might say. (Note: since I wrote these words, Laurie has clarified that another of her recent books, Luna (Aldrich Press, 2015), which I do not have, “is entirely about my family.”)  Following is a sample of the poems in this engaging and colorful book, many of which poems (i.e., the first half of the book) describe Gertrude Stein and her companion Alice B. Toklas and the writers and artists they would have known, or as we will see, not known, at least in the flesh:

I have watched you
and the one you call Alice
during the black petals of sleep,
when all the hardness leaves your faces.

There is a field of tulips not far
from the town I lived in as a boy,
with ragged dark flowers.
The spongy earth
still makes these strong and odd,
almost devoid of beauty,
similarly different
from their pastel companions.

Most of my companions are whores.
If I want a woman, I give up
the few guilders set aside for bread
or paint—I’ve taken the one with lice,
with that violet birthmark staining her neck.

You are husband to her with your lips.
Your woman’s body under those suits
you wear, the edges of your petals
give off luminous sparks,
so strangely you make fire.

If you look closely at my paintings,
you will know my women.
Their proud erect beauty,

their heavy-headed grace. Each Iris,
each Sunflower who has turned from us.

I suppose one of the things that bugs me a bit about this poem, and here note that I am speaking as a historian as well as a poet and editor, is that it is anachronistic. It’s highly unlikely that the “Ghost” of this poem—who is, of course, Vincent van Gogh—would ever have known Gertrude Stein. She was only 16 years old and living in Oakland, California, when Van Gogh committed suicide on July 29, 1890 in Auvers-sur-Oise, France. Maybe it is because the poet knew this reality that explains the reason for making the speaker a “Ghost”! But this is but a niggling objection given the overall luminosity of Byro’s work which has so much to recommend it.  Incidentally, the engaging cover illustration showing Ms. Stein, titled “Gertrude Stein in Pointellism,” executed by Ms. Byro’s talented artist husband Michael Byro and based on the famous portrait of Gertrude Stein by Pablo Picasso, is also of note.  And here I suppose I should insert a disclaimer.  I have known Laurie and her husband Mike for some twenty years having met them several times, during which I have worked closely with her on the Desert Moon Review poetry workshop where I serve as Editor.

In the second half of the book, “Other Legends,” Ms. Byro departs from Gertrude and her salon and explores a variety of other tropes—Ophelia, Darwin, Milton, Russian poet Anna Akhmatova, Emily Brontë, a horsefly, Keats, the legend of Icarus, and William Wordsworth and his sister Dorothy, etc. In these works, Ms. Byro continues the extraordinary journey she began in the opening section of the book. Here is a sample—

The Birds that Lay Down for Icarus

Cormorants conspire to peck each other
to death to furnish him with wings.

Owls call in the sleep of trees.
Huddled together after a night of sex,
their wings ripple patterns in the sand.

Larks rise earlier than usual,
Throw themselves against weathered wood.
The old man walking out in the blue morning
finds a hundred still birds, a trail
of blood outside windows and doors.

He gives thanks for the ease of his prophecy.
The old man settles to pluck at faith—
to tell his son of their good fortune.

In days, fields are no longer
littered with bodies. The air ripples
with a silence like bird song.

Sappho receives a note from the lover
of Icarus warning her against flights
off cliffs. The envelope is sealed with wax
hardened by cold tears. She offers a feather
crusty from sea spray and blood.

Laurie Byro writes with an exceptional beauty that rewards the reader who bears with her.

Christopher T. George was born in Liverpool, England but is a long-time resident of Maryland, where he lives with his wife Donna and two rescue cats. He is an editor of Loch Raven Review and editor at the on-line poetry workshop Desert Moon Review. Chris recently retired as a medical editor in Washington, D.C. His poetry has appeared in publications worldwide. He is also a songwriter, playwright, artist, historian, and Ripperologist. With Northern Ireland historian John McCavitt, he recently published The Man Who Captured Washington: Major General Robert Ross and the War of 1812 (Oklahoma University Press, 2016).

Laurie Byro has been facilitator for the “Circle of Voices” poetry discussion in New Jersey libraries for over 16 years. She is published widely in university presses in the United States and is featured in the recent anthology, St. Peter’s B List.  Laurie has garnered more InterBoard Poetry Community (IBPC) awards than any other poet, currently 47. Two books of her poetry were published in 2015—Luna by Aldrich Press and Gertrude Stein’s Salon and Other Legends by Blue Horse Press. This year, she will receive a 2016 New Jersey Poet’s Prize for the opening poem in the Stein book. Laurie is currently Poet in Residence at the West Milford Township Library, where “Circle of Voices” continues to meet.