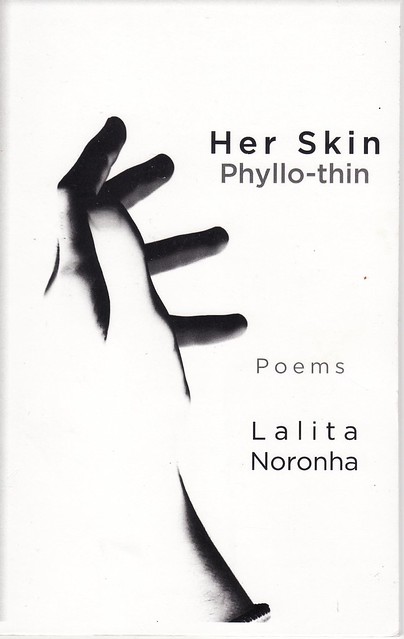 Lalita Noronha’s book of poems is small, although not quite as thin as the adjective in the title, but the size of a book is not an indication of quality. Think of this book as a jewel box. The poems are many faceted and they shine and sparkle with individual color.

Parts of the book are memoir-like memories, personal, up close. The book was written to remember and honor the poet’s mother and to reflect on the mother-daughter relationship. For instance in “Sponge Bath”:

I watch how the aide chucks my mother’s chin,
Scrubs her neck, rubs behind her ears,
Picks up her fallen breasts,
Lifts her legs, scours between,
Thuds them down.

Hey, I want to shout, slow down, not so rough,
But dare I disrupt, dare I find another caretaker?
I—who did not stay,
And won’t for much longer—
Have no say in such matters.

Is there guilt, regret? There is certainly love and the realization of the aged mother now the child. This is certainly a universal feeling. However, one biographical fact , along with the expressive precision of the poetry, lifts the situation out of the commonplace. The poet’s birth country is India. Her mother visited her daughter in the United States but remained in India. The divide is spatial as well as temporal though the bonds of family and affection still, in the circumstances, provide connection. The scene in “Mother’s Passport” as she is on the tarmac boarding the plane to return home understates all so powerfully:

She has shown her passport,
Midnight teal, Ashoka lion seal,
The Republic of India embossed in gold,
It’s getting old, soon to expire, she’s told.
She nods,
Yes, she knows,
She knows,
Turns and waves goodbye.

There are other poems in the book that are portraits of the poet’s own sensibility. Lalita Noronha’s writing is infused with Indian culture but it is also informed by science and an appreciation for the visual arts. Five of the twenty-six poems are descriptions and interactions with works of art. Here is one stanza from “The Kiss” that illustrates the beauty and magic of the poet’s writing. The work of art is Rodin’s sculpture.

It’s the way your hand rest
On her thigh,
Barely touches
Her buttock,
Your thumb poised above,
The way she sits
Sideways astride between
Your legs opened wide.

Science too plays a large part in Ms. Noronha’s world, as it should considering that she was both a research scientist and a science teacher at St. Paul’s School for Girls in Baltimore. Here is a stanza from her poem “Specimen Child”:

I observe you,
My little diatom
On a slide, 40× magnified,
In a buoyant drop of water,
Your intricate, silicate cell walls
Etched with fine lines
And brilliant glassy designs.

The excerpts above demonstrate the poet’s exquisite music with the rhyme and assonance, and her eye is visible everywhere in her words. That’s why I call her book a box of jewels. The poems are satisfying both emotionally and artistically.

Lalita Noronha is a native of India who first came to the United States on a Fulbright travel grant and earned her Ph.D. in microbiology. She is a widely published scientist, poet, and writer. Her literary work has appeared in over eighty journals, magazines and anthologies, including The Baltimore Sun, The Christian Science Monitor, Catholic Digest, Crab Orchard Review, The Pedestal Magazine, and Gargoyle. Her collection of short stories Where Monsoons Cry won the Maryland Literary Arts Award. She is currently seeking a publisher for her novel, Vimala’s Childen. She is a fiction editor for the Baltimore Review, and a science teacher at St. Paul’s School for Girls, Baltimore, Maryland.

Dan Cuddy is an editor of Loch Raven Review. Previously he was a contributing editor with the Maryland Poetry Review and with Lite: Baltimore’s Literary Newspaper. He has been published in many small magazines over the years, such as NEBO, Antioch Review, and Connecticut River Review. In 2003, his book of poems, Handprint On The Window, was published by Three Conditions Press.