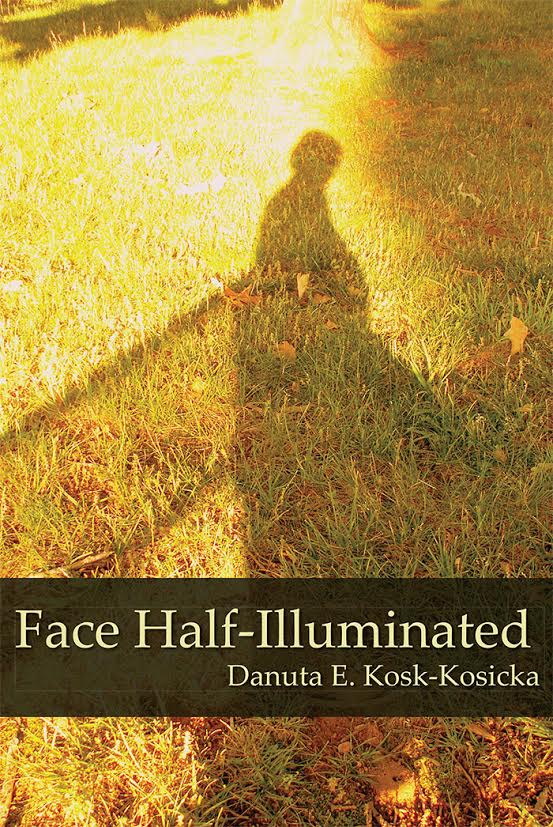 The reader of this fine book of poetry should at first read the autobiographical essay “Turning To Poetry” and then go to the back of the book and read a “Note On Translating” on page 45. The two essays place the poetry in context. In fact Danuta E. Kosk-Kosicka’s life work has been to translate her life and experience of Poland and its very different culture and history into the experience of contemporary America. She reveals another poet, Lidia Kosk, Danuta’s mother, by her intimate translations of Polish into English. Also the 20th century, some of its horror and cruelty are brought into the 21st. A present day millennial can learn a lot about life by reading Face Half-Illuminated.

The poem “Driving on the Beltway” is a quintessential American poem. The contrast presented isn’t necessarily that of a childhood in Poland and an adult life lived in a fast-paced sprawling American city but it is certainly informed by it.

I miss the earthliness.
Instead of the buoyant
steadiness of forsythia’s yellow,
expectancy of apple tree buds

breathing their white insides
open in fragrance,
the coolness of tulip leaves
slowly unwrapping in wisps of laughter,

I feel the push of passing cars,
the uneven pavement,
borders of broken lines,
concrete barriers. While I count

the exits, the minutes crawl
along my spine,
deposit lead in my thighs.
I long for a whiff of chocolate mulch

freshly piled around the trees.
To stop.
To touch the porous skin.
To be touched.

Such a contrast between the natural world and that road that runs through our lives and doesn’t leave time for us to be human, “to be touched!” The beauty of the poet’s work is that setting aside of time and experiencing the moment lived. The smell of chocolate mulch, the forsythia’s yellow, the wisps of tulips’ laughter are small things experienced but so necessary. “To touch….to be touched” are moments that the contemporary world denies us, unless we are a poet, an artist, a child. Will reading this poem make a young person today stop, think, put down the iPod (or whatever the latest gadget is called) ?Probably not, though maybe. The poem encapsulates two moments that most of us have experienced.

It has also been said by some millennials that they aren’t interested in history. Nothing in the past has relevance to today. This poet and her mother prove the lie to that. As anyone, everyone who lives has a childhood, a moment of the most elementary and wonderful impressions, memories; Danuta’s “dream” is very much with her. Moments knock at the door.

Dream in a Red Coat

They knock at a door. Steps approach,
a woman opens, slowly.
Oh, look at the tiny wild strawberry.
Come in,
since you are here.

In the serrated, black & white miniature
my sister stands between my parents
on a Baltic sea pier: chubby face,
a bow in her light-filled locks.
No, that’s me.

I dream-think: mother with her child
looks for a hiding place, girl in the red coat.
And again, my father on the horse, and water
soundless, soft.

What do I know, what can I do?
I can connect with the moment
when my parents lift up the receiver
of the telephone on a distant ocean
shore in a different time zone.

Perhaps the scene—-a man riding a horse, maybe today even lifting the receiver of a telephone—-is ancient history in today’s world of Kanye West, Daisy Ridley, Tom Brady, but the poet brings it alive, engages our eyes, our hearts. We are standing with her. We are hearing her parents’ voices in our imagination. No, we are not the poet exactly, but the power of her visionary words creates images more real than a movie screen or TV creates R2D2’s hologram of Princess Leia. In one sense the Hollywood world is more real and familiar than the history and life in Poland to many Americans. However, the world, the moments of the poet are-were-will be always real. A talented poet—-in two languages yet—- captures both the images of the eye and those created transfigurations of the heart. Hollywood is one of the sparkling surfaces of reality; the poems in this book are the river itself, surface, depth, flow.

The deceiving simplicity of the words of the book’s first poem “Face Half-Illuminated, Half in Shadow” announces that the book is a bridge between worlds, lives, people, time. There is also another voice present in this book—-Lidia Kosk. Her poems are brought to life in English by her daughter. Since the two are mother and daughter the symbiotic relationship of poet and translator is deep, pervasive. Some of the same experiences are shared. Other experiences are revealed in the mother’s words. The whole chapter of the German occupation is revealed in a very telling but not melodramatic way. The words are restrained but emotions such as fear and horror are communicated succinctly, and so too is love.

What would a young person of today learn from Lidia’s poems? History, that dead thing, yes, but also, unlike a dry lecture of dates and times, and abstracted issues, they would enter into a world that the contemporary heart can recognize. Those horrible years of war are not alien to contemporary life. Also parents and grandparents lived intensely. The little things mattered. Poetry itself is a little thing but it contains both the heart and mind of life like a seed. Students of books, students of life should read these two magnificent poets whose lines bleed joy, sorrow, horror and love. In one of the most pointed lessons that one generation passes on to the next is this message in the poem titled “Our Children.” Lidia Kosk writes:

When they started hearing, they heard
guns and bullets rattle
in the stories
about the invasion, about the war

When they started seeing, they saw
people being killed
in the stories
about the invasion, about the war

They were born to peace time
but in their parents’ eyes,
like on a movie reel, the war
rolled on

And we, the parents, rejoiced
that our children had been spared the war

I add—-may it always be so, but the sons and daughters of America, the millennials, as also their older brothers and sisters, have known war and brutality and senselessness. So far, for the most part, the United States has been spared the complete pall of suffering that covered Poland in the 1940’s, and, at times, in the communist era. However, there is no American exceptionalism. Suffering, turns of fortune, are transnational as is the poetry of the human heart.

What should we feel after reading Face Half-Illuminated? There is that complexity of emotion in the many poems but we as readers should feel gratitude to the two poets who have the talent to make their lives available to us.

Danuta E. Kosk-Kosicka is a biochemist, bilingual poet, writer, poetry translator, photographer, and co-editor of the literary journal Loch Raven Review. Her chapbook, Oblige the Light, is the winner of the fifth annual Clarinda Harriss Poetry Prize (CityLit Press). Her poems have appeared in A Narrow Fellow, Baltimore Review, Little Patuxent Review, Passager, Spillway, and elsewhere. Her translations of Maryland Poets Laureate–Lucille Clifton, Josephine Jacobsen, and Linda Pastan– have been published in Poland. Her translations of Lidia Kosk, Ernest Bryll, and Wisława Szymborska’s poems have appeared in the USA. She is also the translator for two bilingual books by Lidia Kosk: niedosyt/reshapings and Słodka woda, słona woda/Sweet Water, Salt Water. She resides in Baltimore County, MD.

Lidia Kosk is the author of eleven books of poetry and short stories, as well as two poetry and short fiction anthologies that she compiled and edited. She collaborated with her late husband, Henryk P. Kosk, on the two-volume Poland’s Generals: A Popular Biographical Lexicon. Her poems have been published in The Blue Lyra Review, Fourth River, International Poetry Review, Interpoezia, Lalitamba, and elsewhere. Her poetry has been translated into eleven languages, and into choral compositions and multimedia video presentations. She was featured, with Danuta, on WYPR’s (Baltimore’s National Public Radio station) “The Signal.” Lidia, a lawyer, humanitarian, and world traveler, resides in Warsaw, Poland, where she leads literary workshops and a Poets’ Theater.